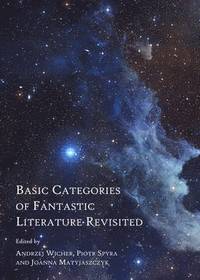 A collection of academic articles is like a collection of short stories: the differences between articles (or stories) are more interesting than the thematic similarities. The free play of imagination is breaking even the genre rules, and that is exactly what makes the stories (or articles on genre texts) so interesting.

This Polish-British collection Basic Categories of Fantastic Literature Revisited (2014) is aiming to rethink the concept of the fantastic as it is defined in the theory of Tzvetan Todorov. As stated in Todorov’s Introduction à la littérature fantastique (1970), there are three modes of fiction outside the great barrier of mainstream literature: the marvellous (with recognizable supernatural elements), the uncanny (with explanations about exceptional things), and the fantastic (with ambivalent signs of the non-natural). Todorov’s definition of the fantastic is usually considered to be more anachronistic than the texts that it is used for, but there still remains the mystery of readers’ pleasure in the kind of “Todorovian hesitation”. And it is here where this Polish-British collection of twelve researchers steps in.

According to the publisher’s info-blurb, the articles are “unified by a highly theoretical focus.” But is there anything “highly theoretical” in Todorov’s legacy? It may be a valuable goal to rethink the usability of Todorov’s view of the fantastic, but the articles in this collection consist of quite usual academic matter with emphasis on case studies.

The articles also have the same kind of ahistorical, structuralist approaches to the fantastic as in Todorov’s or, lately, Farah Mendlesohn’s studies of fantasy. There are some contemporary subjects, like articles about Buffy the Vampire Slayer and George R.R. Martin’s A Song of Ice and Fire series, but even these texts take the definition of ‘fantastic’ for granted, without a wider self-reflection of genre theory.

This is not to say that the articles are too thin with regard to theory. Joanna Matyjaszczyk’s article on the subject of liminal fantasy (and liminal as a fantastic trope) stands out as a good deviation from a typical academic collection. While giving a reliable historical frame for Todorov’s theory, her article is also the theoretical nucleus of this book. As one of the editors, Matyjaszczyk sums up the criticism against Todorov’s theory. Citing not only Todorov, but also Gothic-researcher Manuel Aguirre, she claims that the readers of Romantic age “were in a transitory stage of cultural history wherein science was gradually displacing magical thinking.” The rite of passage in a fantastic story is a kind of trope encouraging the reader to change her interpretations of the fiction. Here are the deep roots of genre fictions as we know them.

The most “postmodern” version of genre criticism is Robert Gadowski’s article on YA dystopias and the “freedom meme.” Basing his article on David Ficher’s thesis that the grand idea of American Freedom is actually based on four cultural-historical components of freedom, Gadowski explains the popularity of recent dystopian YA novels. According to Gadowski, YA dystopias tend to “heighten young people’s awareness of technological perils” and reflect their fears of bio-politics.

The articles like Gadowski’s have nothing left of the Todorovian concept of the fantastic, but they clearly show how the early ideas of literary fantastic are adaptable to new media. For example, in Maciej Weiczorek’s article the basic question is how to adapt the fantastic elements of genre fiction onto theatre stage. There is hardly anything “highly theoretical” in the article, but it may be more insightful than the theoretically thick texts in this collection.

On the other hand, the old ideas about genre literature as the most formulated kind of fiction (with nothing left to discuss in a Todorovian sense of positive hesitation and artistic ambivalence) have been replaced with purist concerns of genre fiction. Sometimes it feels that the academics look at the genre elements as contractual ornaments of genre- or subgenre-purity – and nothing else.

In this collection there is only one article with the idea of Todorovian hesitation and cross-genre viewpoint: the article on George R.R. Martin’s grim-dark fantasy. But even there the question of ambivalence is based on the historical background of novels: the riddles that Martin plays with the central characters are based on medieval theories of kingship. The question remains, who is able to open this rich ambivalence between historical and literal interpretation? Is it a real reader or only an implied reader (as in Todorov’s theory)? Or, to put it in another way, what is the modernist, self-conscious layer of genre fiction in novels like Martin’s hugely popular books?

Todorov’s categories of fantastic seem to be, still, too sloppy for genre research, without a proper diachronic adaptation of his theory.